Can Ayurvedic treatment help get rid of Psoriasis?

Psoriasis is a common inflammatory skin disease. In this disease there is an abnormal growth of skin cells  which could be up to 10 times more than normal. As a result of this overgrowth of skin cells they accumulate on the skin. It creates red patches in different parts of the body generally on knees, elbows and scalp. It then causes itching, burning or soreness.  It leads to discomfiture, swelling and pain. It may even result in pain in the joints. In the long term it even affects the heart, causes high blood pressure and obesity. The unfortunate part is that it is a chronic disease and even more unfortunate is that it has no known permanent cure in allopathic. A victim of Psoriasis has to live with it though it may temporarily subside through medication and changes in lifestyle. 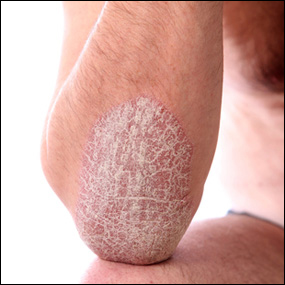 When the body produces a lower than normal amount of fats and oils, several irritants pass into the deeper layers of the skin and they disturb the flow of blood in the body causing red patches. Let us describe it more simply – normally, old skin cells get regularly replaced with the new ones. But in Psoriasis patients’ immune system keeps sending new cells without replacing the old ones and hence the skin cells keep accumulating. The biggest cause of Psoriasis is weak immunity. People with weak immunity are more prone to contact this disease. The second main reason is hereditary history. If someone in the immediate family like mother, father, brother or sister has a history of Psoriasis then he/she is also likely to contact the disease. It has been observed that nearly 50% of Psoriasis patients have a family history of this disease. Other reasons are stress and smoking.  Ayurveda says that some foods if taken together may also cause Psoriasis e.g. milk with salt, hot and cold foods, meat with milk, fish with curd, etc.

Stress weakens the immune system. And psoriasis affects people with weaker immunity. It is therefore imperative that one should keep stress at bay to safeguard themself from the disease or if one is already infected his/her condition may get worse if he/she is carrying stress of any kind in their mind. Ayurveda suggests regular practice of meditation and yoga to fight stress.

Psoriasis is not a contagious disease. It does not spread from people to people irrespective of the type as explained below.

Following are different types of the disease:

Plaque Psoriasis – This is the most common form of Psoriasis. Nearly 80% cases of Psoriasis pertain to this type. It is also known as Psoriasis Vulgaris. It causes raised red skin with silvery patches. It generally affects elbows, knees, scalp and near the buttocks.

Inverse Psoriasis – It is also called Flexural Psoriasis. It affects the skin creases like underarm, groin, buttocks or under the breasts. It too, causes red skin but it is generally shiny and smooth unlike Plaque Psoriasis.

Pustular Psoriasis – It affects the hands and the feet. Affected people may feel feverish, muscle weakness and loss of appetite.

Guttate Psoriasis – it is a sudden development of red patches. Young persons affected with strep throats or a viral upper respiratory infection become it’s victim. It is a rare type of Psoriasis. In some cases it goes away on its own.

Erythrodermic Psoriasis- This is a rarity amongst all Psoriasis patients. Also known as Exfoliative Psoriasis. It gives a look of serious burns and may even need hospitalization.  According to the National Psoriasis Foundation (NSF) of the USA, it consists of nearly 3% of the cases.

Psoriatic Arthritis– It affects the joints and can be very severe. There is no treatment for this type of Psoriasis.

Nail Psoriasis– It is not an officially recognized Psoriasis.  It affects the fingernails or toenails. It may cause crumbling and discoloration of nails, abnormal growth of nails or red or white spots under the nails.

Scalp Psoriasis– As the name suggests it affects the scalp causing it to go red and feels itchy. Of all the Psoriasis cases it consists nearly half of them. It can spread to the forehead, neck and around the ears.

As described above, modern medical science has no effective permanent cure for Psoriasis.  Dermatologists suggest use of creams and injections which only provide temporary relief.  It may go into remission even for years but makes returns and troubles the patient again.

Since allopathic has no permanent cure of Psoriasis,  Ayurveda comes to the rescue. There are Ayurvedic medicines which together with some changes in food habits and lifestyle may provide complete relief from this ailment. As per ancient wisdom of Ayurveda Gau Mutra (cow urine) is at the top of the table to treat Psoriasis. Gau Mutra has anti microbial properties and therefore destroys or inhibits the growth of bacteria and fungi. It is taken orally as well as applied on the affected portions of the body. The Gomutra Ark (cow urine concentrate) should be taken empty stomach in the morning. One thing important to note is that cow urine must be of a desi cow not jersey or any other. Gau Mutra should be applied on the affected areas of the body 40 minutes before bath. While taking a bath one must avoid soap. However, multani mitti (fuller’s earth) can be applied instead of soap.

How to improve immunity to fight Psoriasis

Since Psoriasis is a result of weak immunity following the below mentioned practices will help build stronger immunity to fight the ailment from the root- Yoga boosts immunity greatly. It is therefore required that a patient of Psoriasis  practices Anulom Vilom and Kapalbhati 30 minutes each twice every day. Giloy provides immunity like no other. Giloy juice taken every morning in an empty stomach is a great immunity booster. Giloy tablets are also available in the market which may be consumed before the two major meals every day. Karela and lemon juice mix in an empty stomach can also be taken to boost immunity.

Food recommended by Ayurveda for its Patients

Those suffering from Psoriasis need to improve and strengthen their liver functions. To improve liver functions one needs to change food habits. Ayurveda recommends light food for Psoriasis patients. Non-veg foods which take more time and energy to digest must be avoided. Instead one should eat easy to digest foods and consume lots of green vegetables and fruits. Fried foods are strict no-nos though one must use reasonable amounts of butter and oil to not to allow the skin to go dry. Salads are light and provide the body excellent nutrients. Therefore, one must include a bowlful of salad with the main courses. Sweets need to be avoided and plenty of water should be taken to keep the body hydrated. Consumption of Baingan (brinjal) should be avoided by Psoriasis patients. Anar (pomegranate), Mosambi (citrus limetta), Orange, etc are rich in fibre and help keep the stomach clean and therefore, Ayurveda suggests their consumption. Intake of salt must be minimized if it cannot be avoided altogether. As per Ayurveda, consumption of flax seeds (alsi ke beej) helps fight Psoriasis.

Ayurveda recommends drinking of warm water instead of normal water as it helps flush toxins from the body.

Neem Ghanvati 1or 2 tablets can be taken after meals. Aloe Vera, amla and giloy powder should be taken three times a day. Apart from these medicines any of the following can be applied on the affected areas for quicker relief.

A completely different aspect to fight Psoriasis is to keep the home or office moist with a humidifier. And, Psoriasis patients should not go out in the sun so as not to aggravate the problem.

Psoriasis does not have any quick fix solution. One needs to have patience and a positive mindset to win over the disease. Modern medical science has not found a definite and permanent cure for it but as per Ayurveda it is completely curable. A long term medicinal regimen and changes in food habits and lifestyle may cure the disease fully in nearly six months though it may take a little longer depending upon the severity of the problem.

Shita Pitta in Ayurveda or Urticaria

Click one of our representatives below to chat on WhatsApp or send us an email to info@ayurveda.online